NEW CREATIONS EACH AND EVERY DAY

Abstract
Drought is a major abiotic stress affecting watermelon productivity (Boyer, 1982, Zhang et al., 2011) and has progressed to alarming levels worldwide including USA, South America, the Middle East, Russia and the Far East. Therefore, the genetic improvement of stress tolerance in plants is an urgent challenge for the future of watermelon agriculture (Akashi et al., 2005).
There is a need to provide a solution to drought conditions. Zhang et al., (2011) discussed plants in the early germination stage but provided no solution for watermelons throughout the growing season until harvest of the mature fruit. Yasar et al., (2012) experimented with PEG for simulation of drought conditions and Park et al. (2012) analyzed theoretical transgenic plants resistant to drought stress.
Vegetable grafting using rootstocks has emerged as a rapid tool in tailoring plants to suboptimal growth conditions (Kumar et al., 2017; Rassol Etemadi, 2015; Rouphael et al., 2008). While there is a lot of information on grafting improving the tolerance of watermelon to drought conditions, there is a need for understanding the adaptive responses of wild and domesticated watermelon genotypes to drought stress (Yanling et al., 2015).
Origene Seeds™ is developing watermelon hybrids with high drought tolerance focusing on introgression of traits from wild watermelon genotypes to cultivated ones.
This study was undertaken to determine which genotypes could maintain a relatively consistent level of transpiration under decreasing soil water conditions.
When comparing the transpiration to the water soil content during a study, while genotype #1&#2 are tolerant to drought conditions and genotype #3&#4 are sensitive, The peak for #3&#4 is followed by a steady decline to near zero transpiration, while #1 and #2 plateau across a range of soil water content (figure 1). 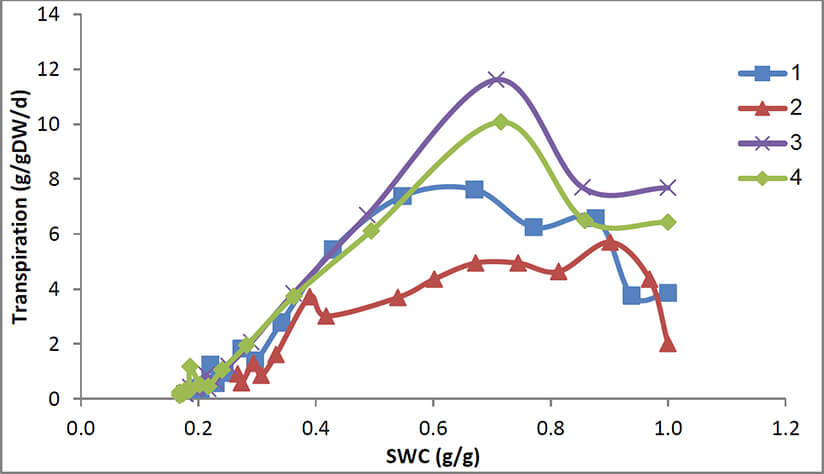 Acknowledgements
Thanks to Dotan Weiss for exceptional maintenance and devotion to the care of the plants and for Prof. Eshel A., TLV University for the advice and support.

Happiness held is the seed; Happiness shared is the flower.